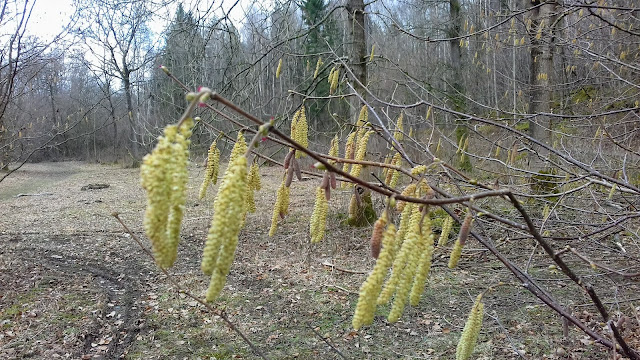 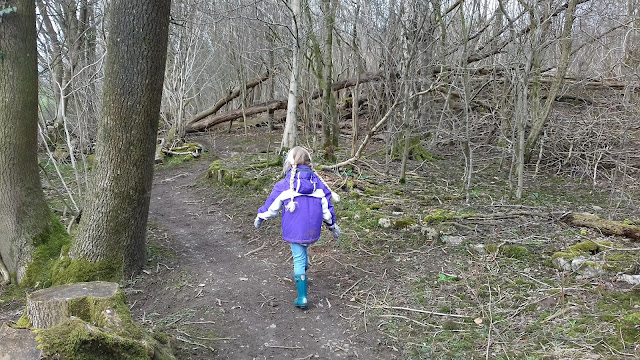 Each morning now I wake and wonder if the day will bring a noticeable rise in temperature. It's flipping freezing! And not very Spring like. Winter, you have been wonderful, but it's time you went now. I am desperately ready to breathe in some warm, sweet air.

So far this month life has been fairly hectic. I am settling into and enjoying working once again, but because I've also been volunteering at Lily's school and doing some online training, it has been taking up quite a bit of my time and I'm struggling to find the balance between having some time out and getting all the chores done. I won't worry too much though, as if that's all I have to concern myself with then I am very blessed - the housework will always wait, but it's those moments when I sit down in an evening and realise how messy everything is that I don't like. Maybe I'll have a good clean though tomorrow.

Last week we did have a hint of some mild weather so we took ourselves out for a gentle walk. The Snowdrops are fading now and the Wild Garlic is trying it's best to make an appearance in the woods. In the sun it was pleasant enough to sit a while and take in the view. Lily, of course, had other ideas and wanted to play hide and seek! As you can see from the photograph below the hiding places were few and far between, but as big sister took charge, I could sit back, relax and enjoy watching them laugh and play, all the while  berating myself for not fetching a flask of coffee with me. 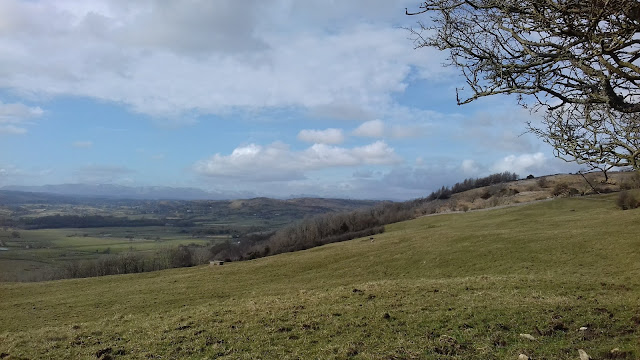 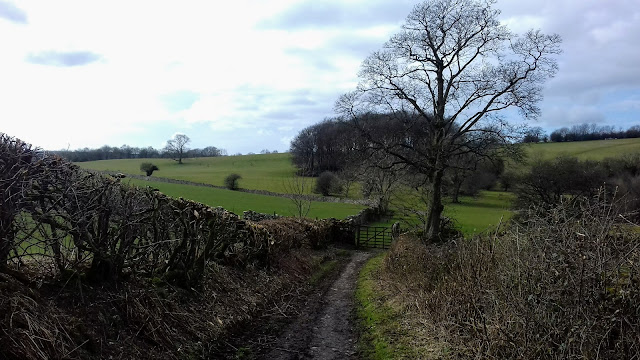 Also, during the week I  enjoyed a proud mummy moment. Lily has learned to ride her bike! and is, quite rightly, very happy about it, smiling and giggling as she cycles along. I can now see us having many rides out this Summer. When I took this photograph she still needed a little help setting off, but now  she can do that by herself there will be no stopping her. 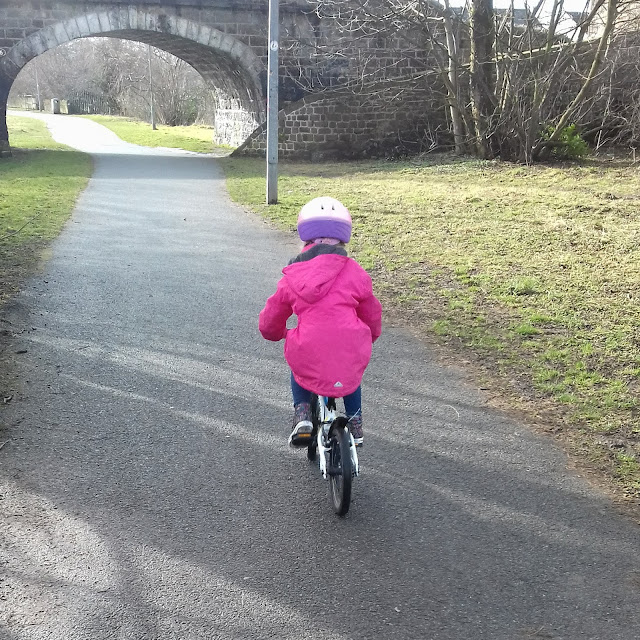 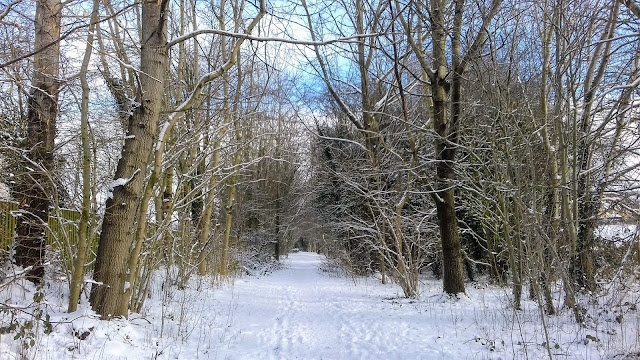 I really hope you don't mind me sharing my snow photographs from this last week, even if they are a little later than most.
Last Tuesday it began to snow here. There was a reasonable covering and as Lily wasn't at school that day we had a great time playing in the garden.
The following morning we awoke to even more snow, and not only that but the soft flakes were still falling thick and fast. In a very short space of time the fields, pathways and roads were covered with a blanket of white. Then the message came through - school had declared a Snow Day! I remember as a child, every Winter holding out for this magical event. A day spent having fun, instead of being spent sat in the classroom. Or lessons spent wistfully staring out of the window at the falling flakes, desperately hoping it was heavy enough for it to be considered sensible to send us all home early. Sadly, in reality, Snow Days are very few and far between, so therefore, must be filled with as much fun and silliness as possible. 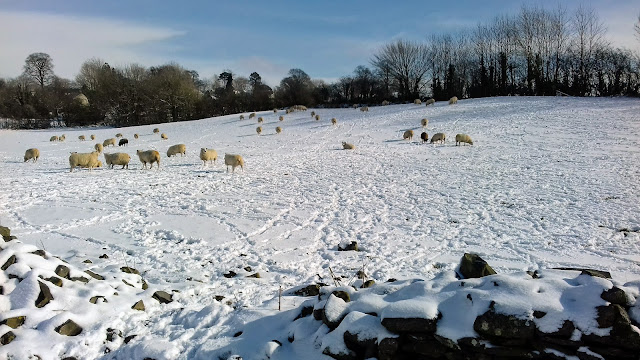 We waited until mid-morning and took our sledges into the fields down the lane behind our house, where there is a perfectly formed hill which is ideal for sledging. It is not too steep and is right in the middle of the field, well away from fences, walls and other potential hazards. The sheep, as you can see, were not in the slightest bit interested. It was bitterly cold but we were wrapped up well in our jackets and salopettes. 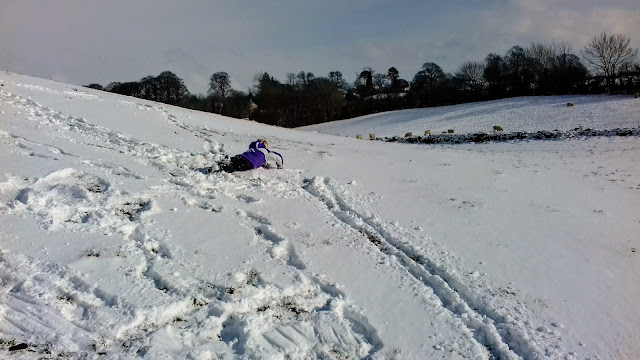 And when we tired of sledging we rolled down the hill. Yes, I did too! 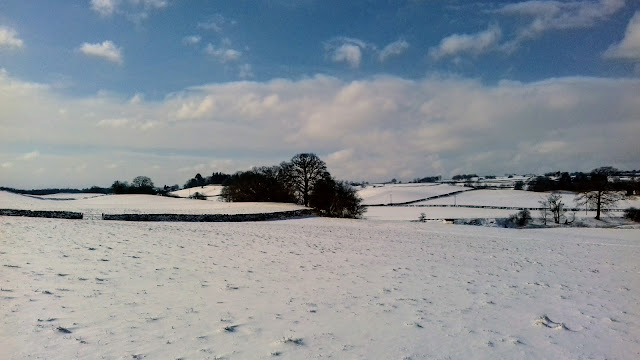 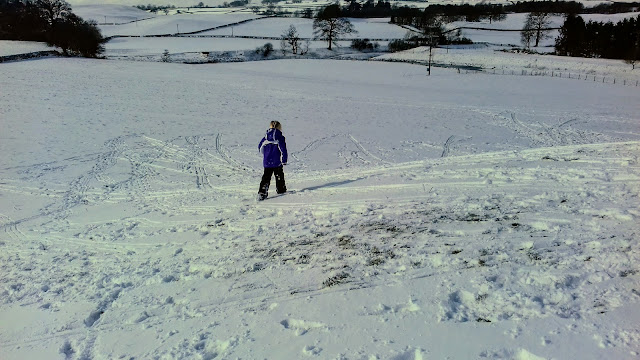 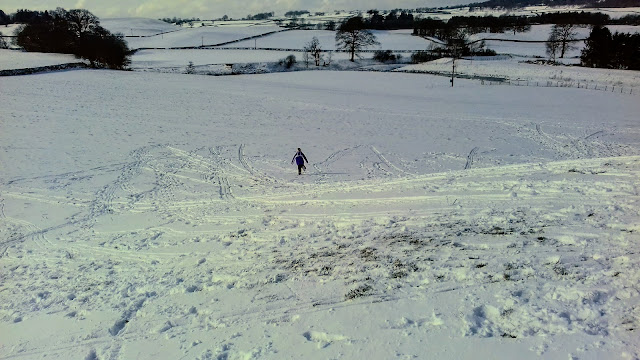 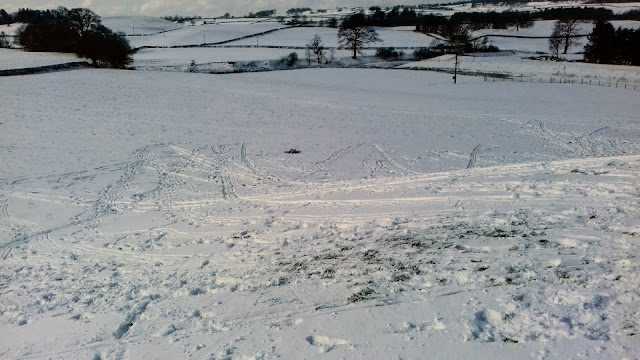 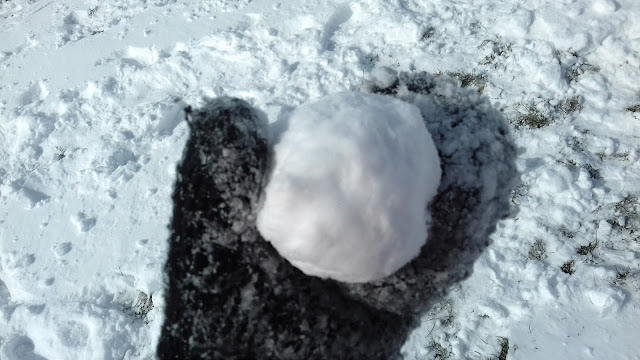 It was such a fun morning, then Lily persuaded me it would be a great idea for me to pull her back home on the sledge. Exhausting for me, but she was so happy it was worth it. A quick lunch then we were into the garden again to have a snowball fight. Once the activity calmed down a bit the cold began to set in, so we retreated inside to the warmth of the fire and a hot drink, outdoor clothing hung up to dry on the radiators.
It was such a special day, full of happiness and laughter. One of those little gems of simple pleasure that life throws at us from time to time.
Unfortunately, that same evening I became ill with Norovirus! I should have guessed it was coming, as I felt a little more nauseous than expected after rolling down the hill and Lily had suffered from it the previous week. Thankfully, it passed quickly and this week I am concentrating on getting my strength back and working up to eating a proper meal once again. Soup has been my saving grace. Thank you to everyone who has already wished me well over the last few days.
The snow is all but gone now except for on the high fells and the odd patches of white in the fields. Winter is enjoying having its last blast but for me, after the last few days,  I am finally feeling the need for some warm Spring air.
J. X