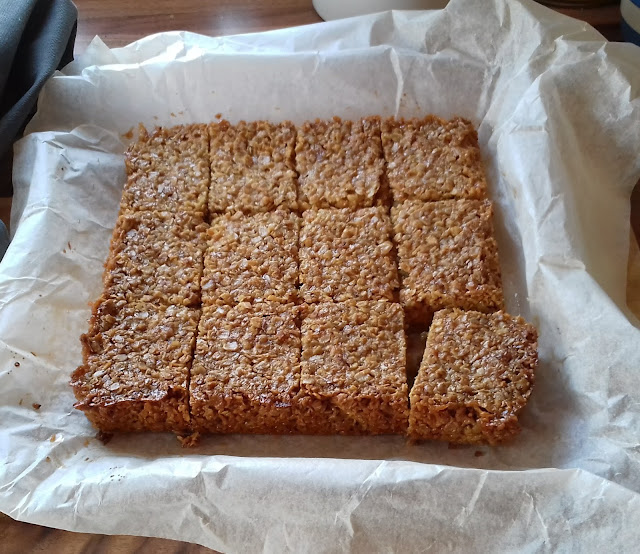 A few people have requested  my flapjack recipe, so I thought I'd post it here. Although I didn't think it was possible to go far wrong with just oats, syrup, butter and sugar, for years I used to struggle and would end up with something which was either so soft it would just collapse when I tried to pick it up, or so brittle it would simply shatter when I tried to slice into it. Fed up with disastrous results and having tested out various recipes found online, I decided, instead, to experiment with the quantities of the ingredients and have discovered a recipe which works for us. Not too crunchy, not too soft and it holds itself together remarkably well when we take some along with us when out walking. Not forgetting the piece Lily has in her packed lunch every day.


Melt together the butter, sugar and syrup then stir through the oats. Mix well then put into a lined 20x20cm tin and press down. Bake at 160°C for around 20 minutes. Let it stand for at least 10 minutes then slice into nine or twelve pieces while still in the tin. Allow to cool fully. If  you're feeling frivolous you could always drizzle with some melted chocolate.