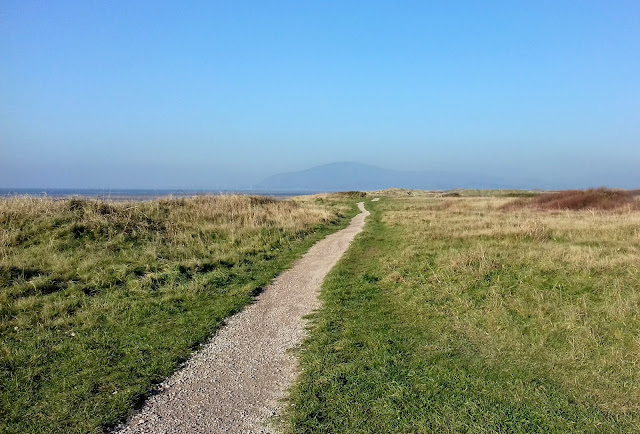 Thank you so much for all your good wishes on my last post. I'm relieved to say my sore throat is all but gone and I'm feeling much better.
Since the weekend, the temperature has plummeted here and the damp in the air only adds to the feeling of cold. I've been rummaging at the backs of drawers and cupboards for woolly hats, scarves and mittens and I'm pleased to report that the central heating is holding it's own - for now at least. I hope I haven't just jinxed it as I do not relish a repeat of last year.
The days are becoming darker now and the lack of sunshine is taking it's toll. I'm trying to remember to take care of myself  but it's the time of year when there is so much going on that time for myself is easily overlooked. As usual, it is something I need to prioritise. 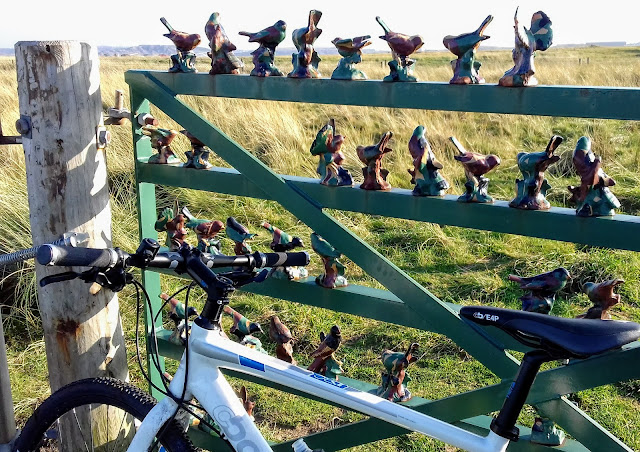 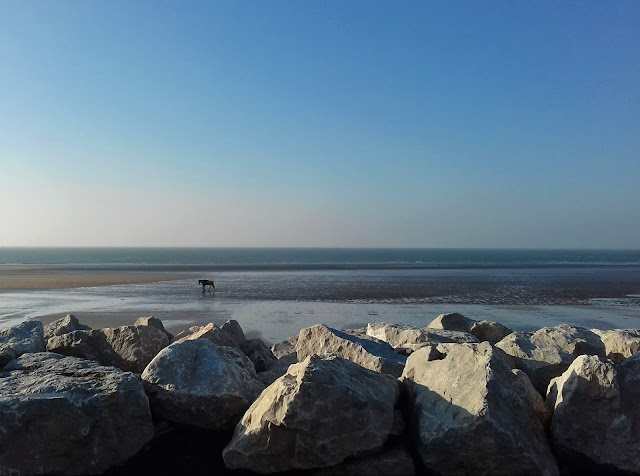 This wasn't the situation at the weekend, however. The sun was shining and the weather was glorious - hardly a cloud in the sky. It is always a wonderful feeling when the good weather days and the weekend coincide with one another.
On Saturday we went for a gentle bike ride out towards the nature reserve. It had been a while since our last ride so we didn't cover many miles but we contented ourselves with the sea views and watching the gliders taking off and landing, one swooping so close, right above our heads. 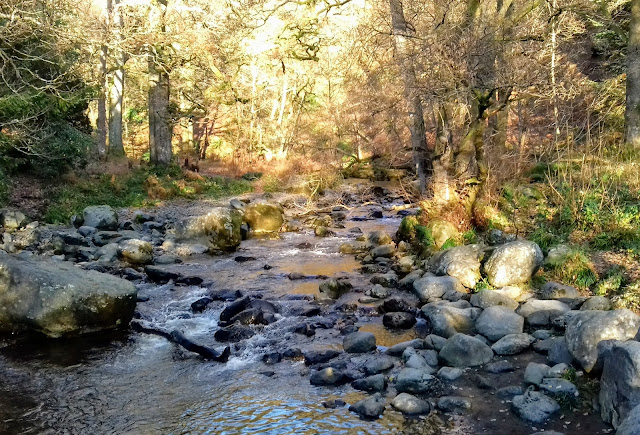 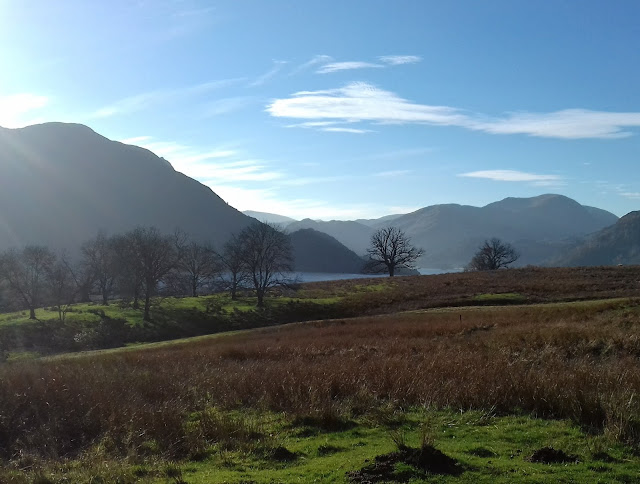 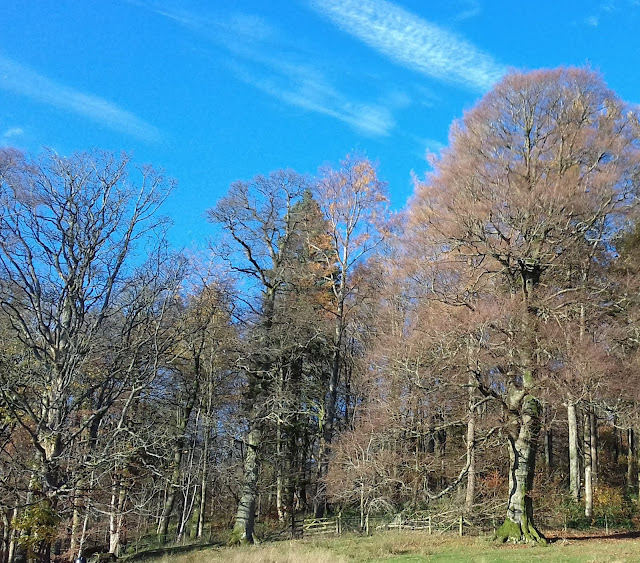 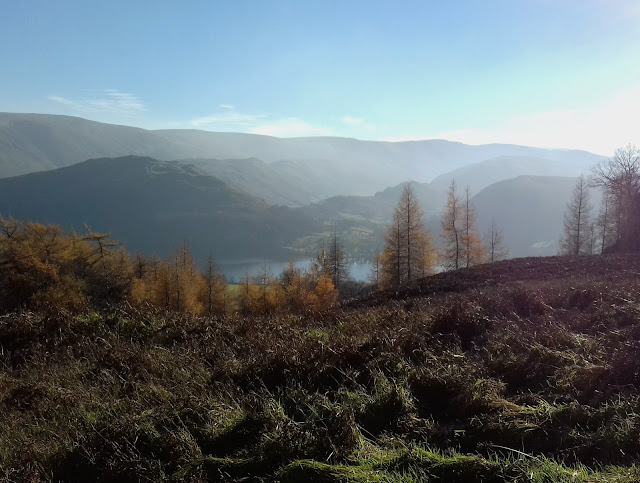 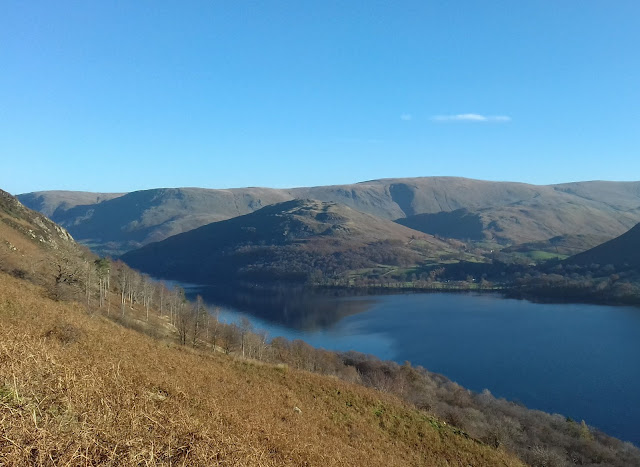 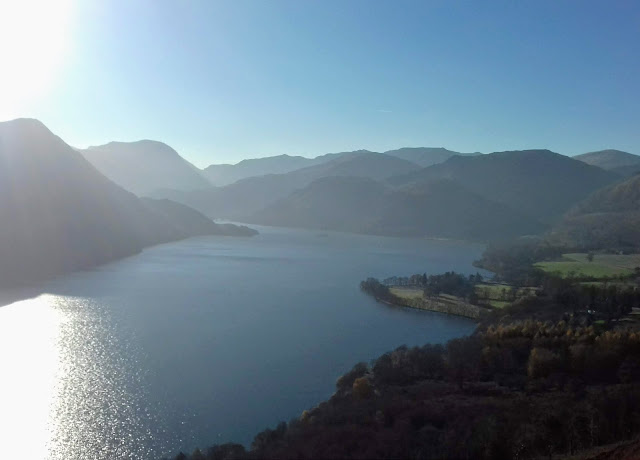 I knew the forecast for Sunday was just as good, so had already planned for an early start to Gowbarrow Fell. The route begins by Aira Force and is a clearly marked, well trodden path, just the thing for a relaxed morning walk. We followed the path up through the waterfalls and around the side of the fell turning up sharply in order to reach the trig point on the summit. On the way back down we walked around the eastern side of the fell and were treated to the spectacular views of the lake opening up before us; the late autumn sunshine warming our faces and allowing for the removal of our jackets.
We found the perfect spot for our picnic - a row of rocks which appeared like a bench, overlooking the lake. However, my day was complete when, on return to the café at the car park, I enjoyed one of the best cups of tea ever! I know, I'm easily pleased. I'm not sure if it had been the fresh air and exercise that increased my satisfaction but it tasted soooo good. Although it had only been a gentle walk, this cup of tea was so welcome as tiredness suddenly overwhelmed me. Lily, on the other hand, managed it with ease and had even skipped most of the way!

While collecting Lily from school this evening, I noticed the roads through the village had been gritted,  most of the autumn colour has gone and the tree behind the house is now completely bare. This week I could really do to have a last tidy  up of the garden before winter and put away the outdoor table and chairs. I can't think that in a little over a week we will be entering the last month of the year but I'm getting ready to look forward to Christmas and all the excitement it will bring.

Edit. The gate in the second photograph holds cast iron British birds in military camouflage. It forms part of an art installation which is a war memorial on the site of former practice trenches used for training soldiers and cadets during the first and second world wars.
Posted by Jules at 17:28 60 comments: