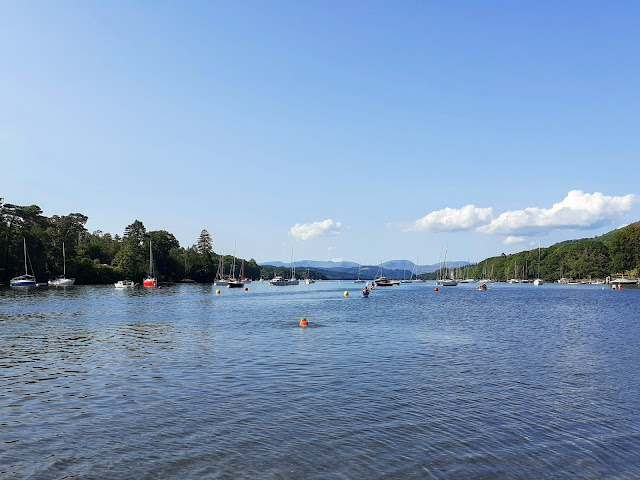 As is usual for me just now, I woke early and crept quietly downstairs to begin my day. Mog quickly followed, in hopeful anticipation of being fed. While I was waiting  for my coffee to brew, I cleared away the dishes from the previous evening and folded the towels which had been hung up to dry overnight. The house is always in disarray at this time of year. At the moment there are three large pool inflatables filling the dining room, piles of beach towels covering the table, and water shoes and a random buoyancy aid are creating a trip hazard along the hallway. I don't really mind. It's all part of summer living and as there will be plenty of time to clear and tidy once the weather changes, I will enjoy the sunshine while it lasts.

During the morning, while Lily chose to catch up with some of her favourite shows on the laptop, I set about making a curry for dinner. I fried off an onion, then added some sweet potato, spinach and curry paste. After stirring in some tinned tomatoes and a little vegetable stock, I added a cupful of lentils and left to simmer until thickened. In the evening I would quickly cook up some rice to go with it, because I had other plans for the afternoon. We were going to the lake.

Where we were going, I knew it would be quite busy, so I decided to arrive mid-afteenoon, by which time many people who had spent the morning there would have left. We found a nice shady spot beneath the trees to park the car and walked down the hill, where it was lovely to see everyone enjoying the sunshine. It was still busy, but not unpleasantly so, and it wasn't long before the paddle board had set off down the lake while I was left behind, soaking up the sun's rays. There was a brief moment of surprise when three low flying jets went overhead. They are incredibly loud and appear without warning heading right down the valley. But we spent the rest of the afternoon undisturbed, swimming and enjoying the water until it was time to return home, looking forward to a return visit later in the week.