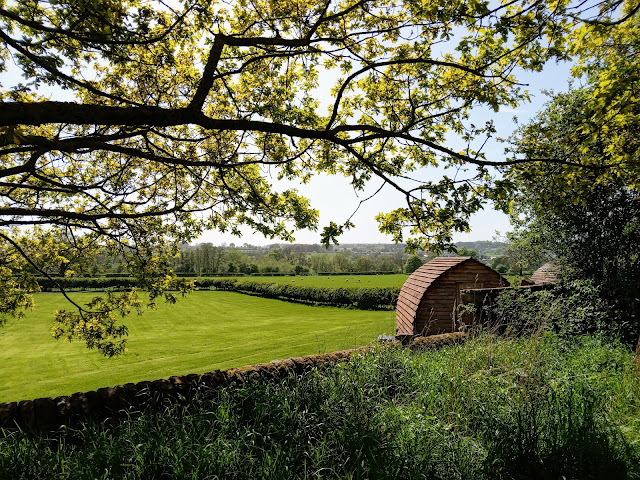 As I sit here, looking out of the window the sky is grey and the drizzle is persistent. It is a miserable kind of day. Spring seems to be dragging out, and as ever I long for the long hot days of summer.
This time last week we had just returned from a weekend camping, when thankfully we experienced some much brighter and warmer weather.
For her birthday this year, Lily decided she would very much like to stay in a camping pod. And after a lengthy search online I discovered what appeared to be the perfect site, and not too far away, given that we would need to travel there on the Friday evening once I had finished work. With limited time, it was a bit fraught having to rush around packing up everything we needed, but fortunately I had remembered to write out a comprehensive list of items the day before (who doesn't love a good list?) and we arrived at the site just before the farmer and his wife were ready to sit down for their dinner. 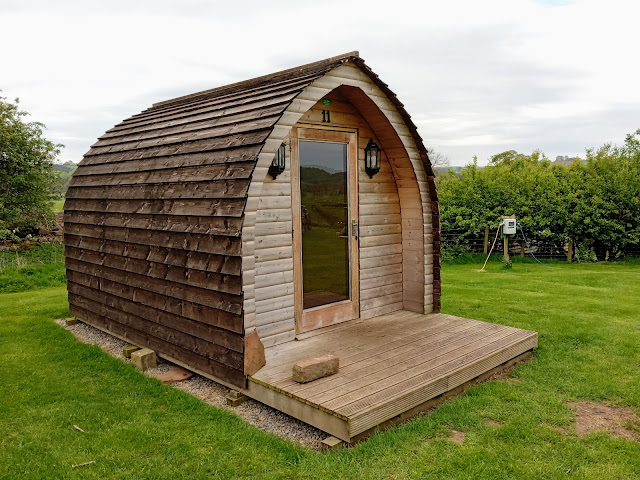 *Our accommodation for the weekend.*
The site itself was lovely, and I would say even better than I had expected. The pod looked out across fields full of sheep and lambs, with access to the river and a great play area, where Lily spent much of her time with newly made friends. It was so relaxing just to sit and enjoy the views. Rabbits ran in the fields, sparrows flew in and out of the hedgerows, and I even heard my first cuckoo of the year. 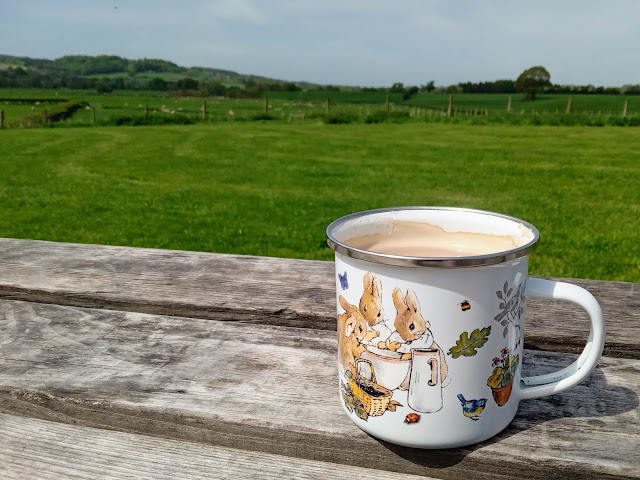 On the Saturday morning I awoke nice and early, so I could enjoy my coffee, sat on the bench in front of our pod. I wrapped a blanket around myself, as the air was still cool at that time of the morning but the sky already showed promise of a bright sunny day ahead. We had already planned to walk along the river to Lacy's Caves, then on to the village of Little Salkeld, returning via Long Meg and Her Daughters Stone Circle. About 7miles in all. Then perhaps a swim at the nearby pool in the afternoon. 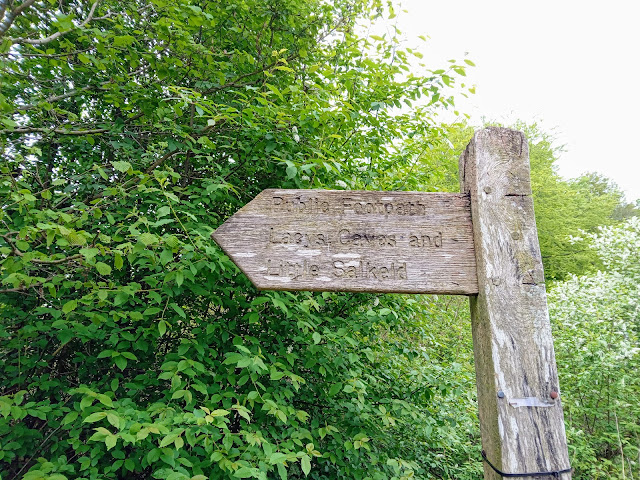 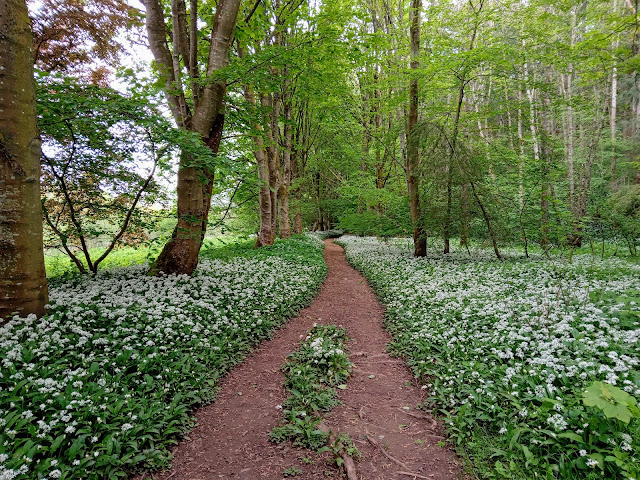 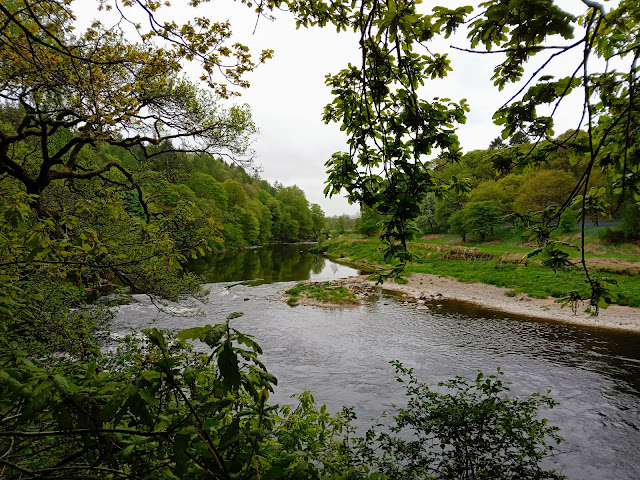 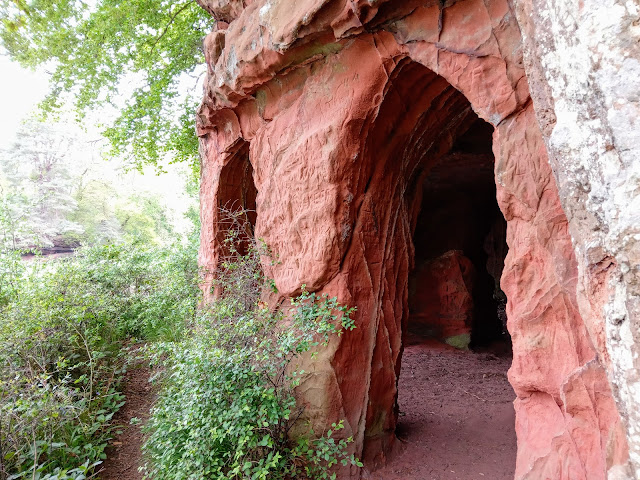 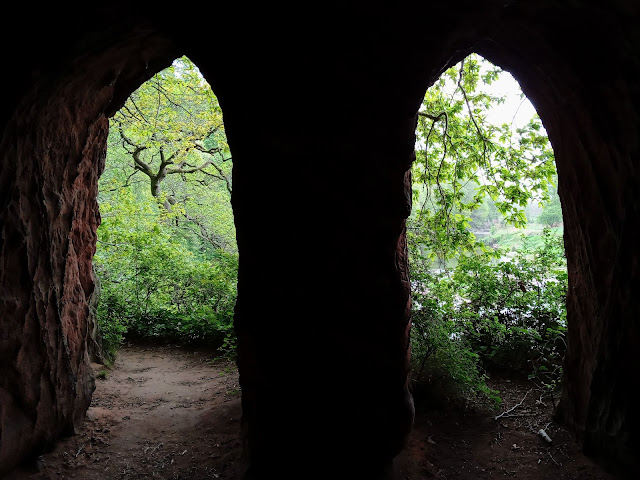 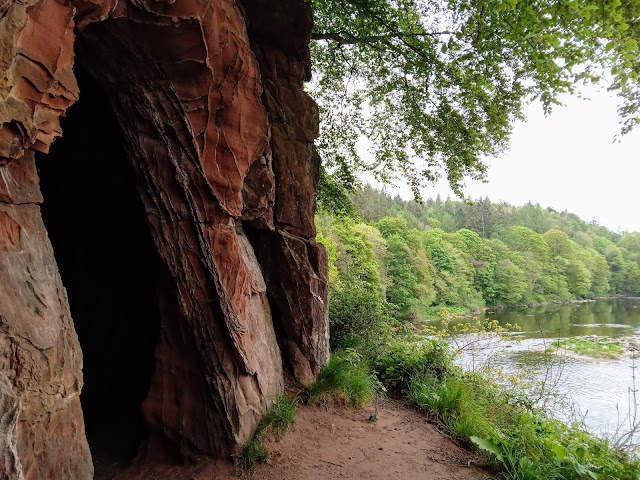 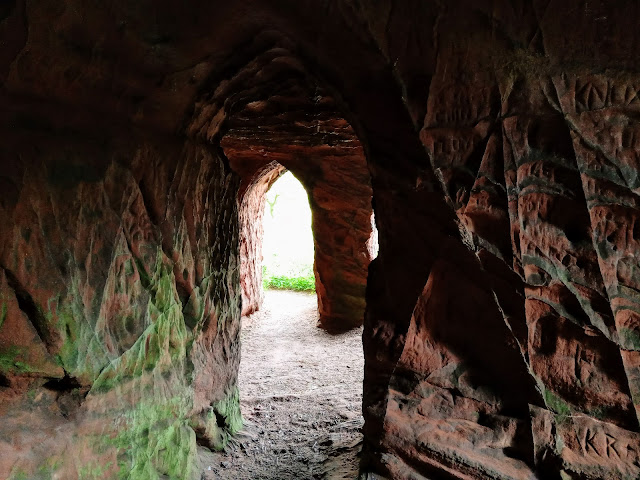 The caves are made up of five chambers, which were commissioned to be carved by Colonel Lacy, of Salkeld Hall, in the 18th century, allegedly for entertaining guests. 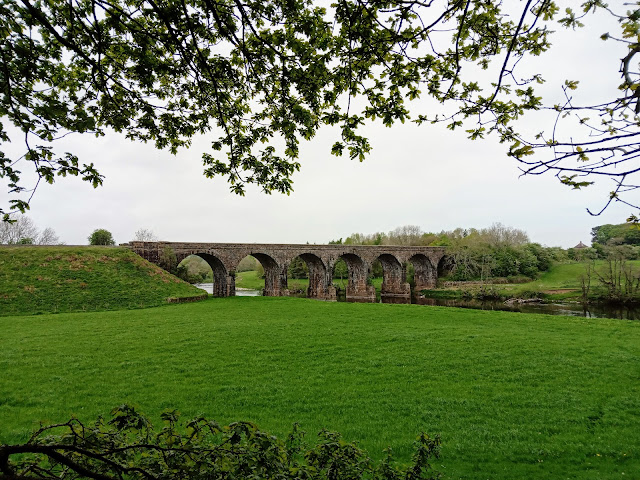 Further along, the path ran alongside the Settle-Carlisle line, where we unintentionally disturbed a deer which had been sleeping in the long grass, close to the track 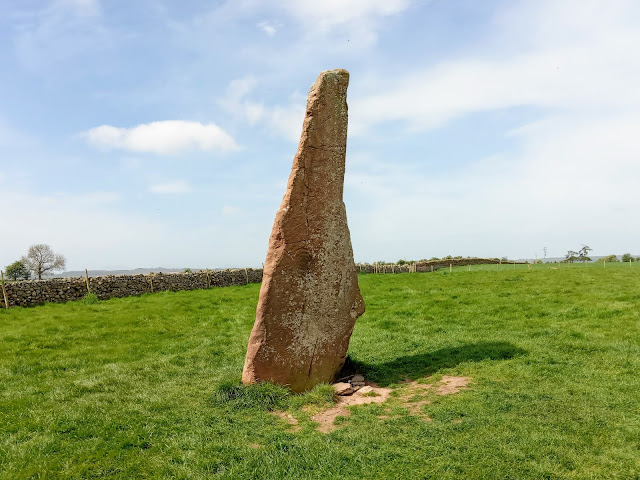 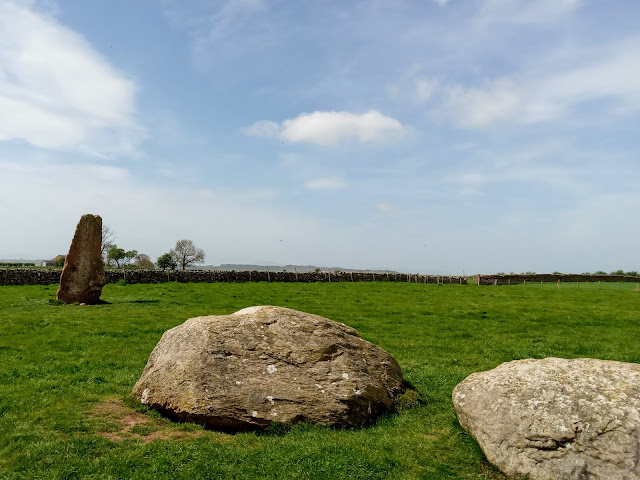 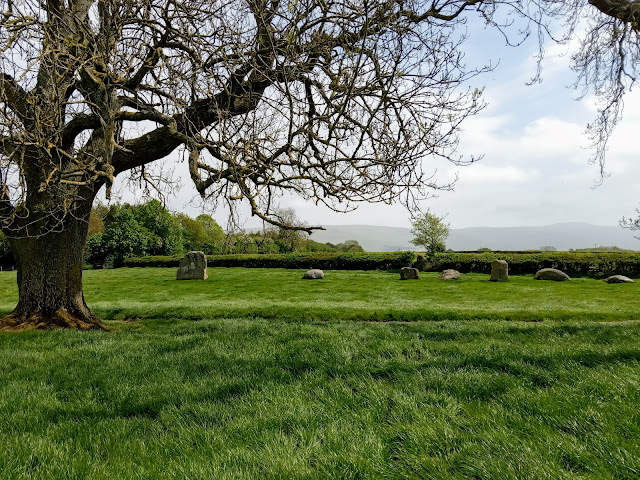 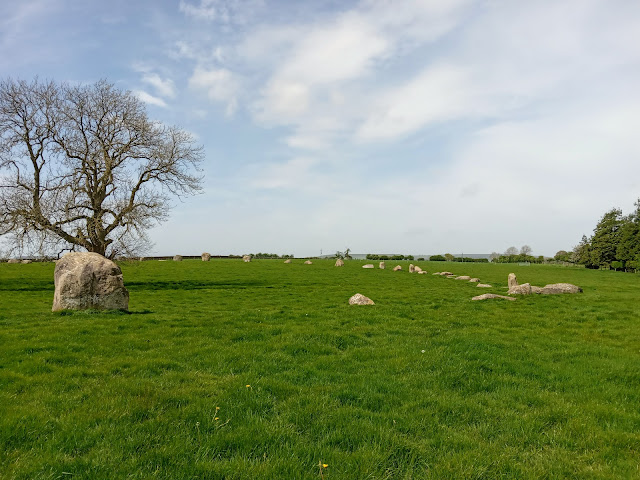 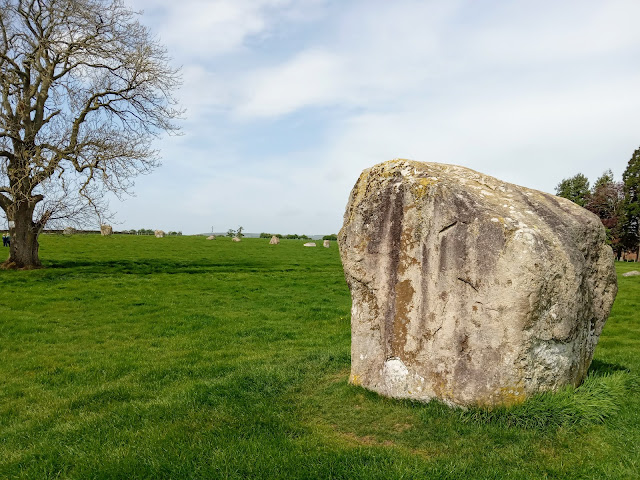 Long Meg and Her Daughters is a Neolithic stone circle, made up of 69 stones, with a diameter of 350 feet. Long Meg being the tallest at 12 feet high.
At this point on our walk we had begun to feel rather hot, and so it was a relief to be heading back towards the pod. The rest of our route took us through fields and along wooded tracks, bringing us back alongside the river at the bottom of the site once again. After a delicious lunch of sausages, cooked on our small camping stove, I spent the rest of the afternoon reading my book while Lily played with her friends again. We decided not to go for a swim in the end, maybe another time. 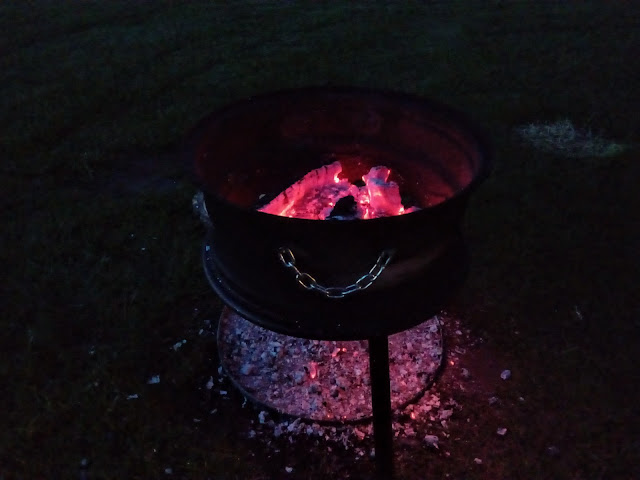 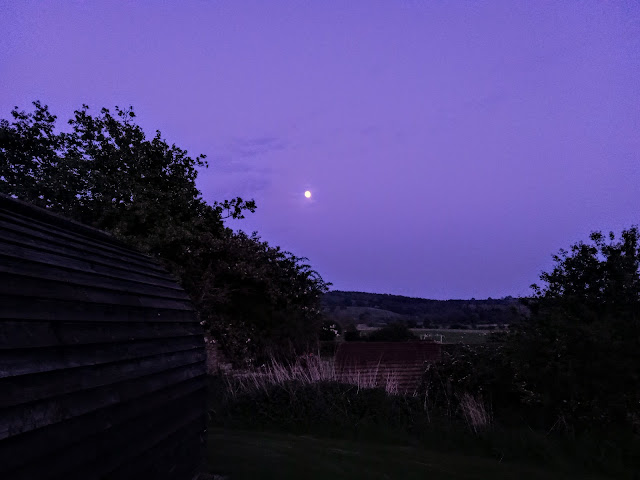 In the evening we were joined by big sister and took a very scenic drive over Hartside, towards the delightful little Market town of Alston, startling another deer on the way, where we enjoyed a fish and chip supper. Eventually returning to the pod to light our campfire, toast some marshmallows and drink hot chocolate, as Lily declared it her, 'Best Birthday ever!'
J. X
Posted by Jules at 16:12 54 comments: