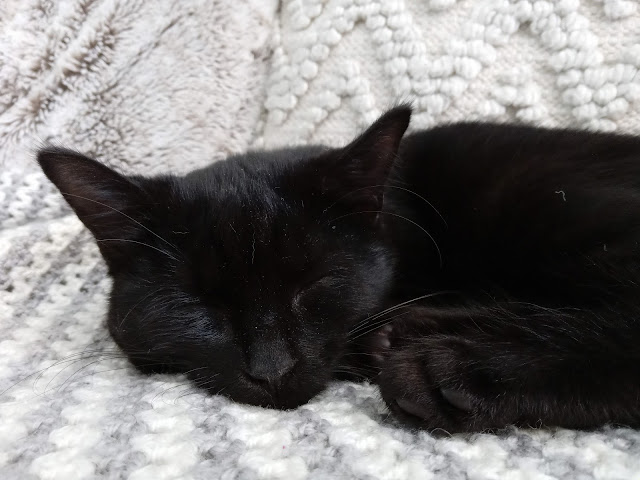 This one has been a conplete star today. Early this morning, I dropped him off at the vets, then late afternoon I picked him up again. There was slightly less of him this by this time, but he appeared to be none the worse for his experience. In fact, for a while, he seemed even more lively than usual. He was treated to a well deserved meal of fresh turkey this evening, and I think he might just sleep well tonight. He was very well behaved throughout and I believe he enjoyed lots of cuddles from the staff at the surgery.

It has been another incredibly chilly day. It was -5° this morning, so I replenished the bird feeder and then I broke the ice on the container pond. Fortunately the pavements were mostly clear but the rooftops were all white with frost and there were icicles hanging from the corner of a house in the village!

While Boo was being well looked after, this afternoon I was helping at the Warm Space event again. This week I took along some Mincemeat Shortbread, which disappeared rather quickly. It is a favourite of mine, and so much quicker than baking individual mince pies. The recipe can be accessed via the side bar, although I will put up a link later on, when I can get on my laptop. There were a few more people attending this time. Hopefully, there will be even more next week, if word gets around.